You know you’ve just watched a good movie when you find yourself shaking off a full-body feeling of anticipation and dread as the credits roll. These are the movies you watch, slack-jawed, in an awkward position without ever realizing you were uncomfortable. From the opening scene they grab you by the lapels and hold you there, transfixed. Atom Egoyan’s Remember is just such a movie. 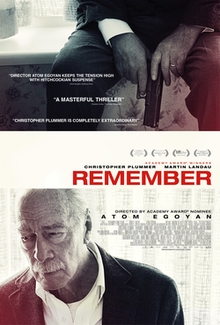 When Zev Guttman (Christopher Plummer) stumbles from his bed in an assisted living facility, calling for his dead wife, Ruth, there is little to suggest that this fragile old man would be capable of caring for himself. Clearly suffering from dementia, Zev requires frequent redirection and often needs the basics of his situation explained. When his neighbor, Max Rosenbaum (Martin Landau), reminds Zev of what he planned to do after Ruth’s death, you assume that the two have a long history and a firm agreement. Zev listens faithfully to Max’s instructions, as though remembering something he thought of himself, and we accept that Zev is committed to his plan. You know, just your average cross country trip to find the Nazis who killed their families in Auschwitz.

Zev slips away during Ruth’s memorial service, armed only with an envelope full of money and a letter from Max meticulously detailing his journey. He moves from one destination to the next deliberately, but blindly. The letter says to get into a cab, so Zev gets into a cab. The letter says to check into a hotel, so Zev checks into a hotel. The letter says to buy a gun, so Zev goes ahead and upgrades to a Glock. He’s no dummy, but without the letter, Zev is loses the plot. What is he doing? And more importantly, where’s Ruth?

As the movie progresses, the sense of tension continues to rise. Zev keeps meeting his marks, but each step of the journey seems to put him in greater peril. Nevermind the fact that he’s tracking down Nazis who adopted the identities of prisoners in Auschwitz in their homes, Zev can barely get out of bed without getting lost. The more attached we get to Zev, who is determined and vulnerable and very sweet to children, the more you realize things will have to end badly for him. Even if he survives killing all the men on his list, he will eventually be caught. Damn, Max, this was kind of a crappy thing to do to your friend.

The pieces come together in the films final scenes, making Remember not just an excellent revenge movie, but an excellent revenge movie with a twist. There are times when Zev’s dementia is conveniently better or worse, depending on the plot point, but Plummer’s performance is so authentic that it’s worth overlooking. At 86 years old, he continues to prove himself to be a total badass.