By any logical standards it shouldn’t work, but it succeeds as a romance, a tragedy, a thriller, and even as a comedy.
By Jenniferon March 16, 2014
0 Comments
Our Rating 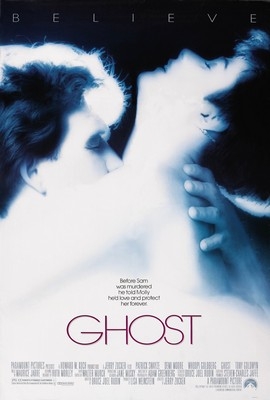 I was thirteen when Ghost came out, and I was swiftly caught up in the romance of the movie. I listened to “Unchained Melody” about five thousand times, and watched every cast interview and every making-of featurette I could find. I didn’t even see the movie until it was released on video, and after all that hoopla, I had pretty much set myself up for disappointment. Amazingly, it was even better than I expected, and it compelled me to listen to “Unchained Melody” another five thousand times. I reached a point of Ghost burnout a few years ago (after many, many viewings), but when the Special Collector’s Edition appeared in my mailbox, I just about flipped. It felt like Christmas morning for hours, and I couldn’t wait to check it out. Once again, I was pleasantly surprised at how well the movie holds up. By any logical standards it shouldn’t work, but it succeeds as a romance, a tragedy, a thriller, and even as a comedy.

Molly (Demi Moore) and Sam (Patrick Swayze) are just beginning to come into their own as the movie begins. Sam is a successful banker, Molly is an up-and-coming artist, and they’ve just moved into a new place together. They roll up their sleeves and convert an old loft into a stunning new home, but Sam remains tentative about the future. Nothing good ever seems to last for him, and sadly, he’s right.

The happy couple have just begun to discuss marriage when they run into a mugger in a seedy part of town. Sam is killed in the confrontation, but his spirit remains earthbound. At first it seems as though he’s simply unable to accept that he’s dead, that he still wants desperately to be near Molly, but as he watches over her, it becomes apparent that his death was far from random and that Molly may still be in danger. In fact, Carl (Tony Goldwyn), their most trusted friend might be at the root of it all.

At this point, Sam enlists the help of Oda Mae Brown (Whoopi Goldberg). She’s a “medium” (a.k.a. skilled con-woman) with a rap sheet that goes back to the sixties. He’s the first spirit she’s actually been able to communicate with, and she’s Sam’s only connection to the living. He needs her to warn Molly and stop Carl, but she’s not so sure she wants to get involved. Comedy ensues as Sam tries to express himself through a woman who couldn’t be more his opposite, but the urgency remains. Will Molly realize that Carl is bad news? Will she ever believe that Oda Mae means business and that Sam really is right beside her? Of course she will! How disappointing would it be if she never connected with Sam again?!

Ultimately, Ghost offers up the perfect marriage of cast, characters, and plot. Molly is strong and even-tempered, both a girl’s girl and one of the guys. She’s someone you’d be happy to call your friend, and her grief is palpable. As far as I’m concerned, Demi Moore is the queen of onscreen tears. Sam is straightforward and sincere, and his tragic fate is even more heart-breaking because he just knew his happiness wouldn’t last. Also somewhat heart-breaking is Swayze’s subsequent face-lift and swift slide into obscurity. Whoopi Goldberg shows her range as Oda Mae, and is alternately comic and serious as the role demands. Who says Whoopi can’t do drama? Am I the only one who watched The Color Purple, like, ten times? As Carl, Tony Goldwyn is as charming as he is slimy, but by the end he practically oozes evil. To this day, no matter what he does, my friend says she can still see the evil spirits hanging around him. Even Vincent Schiavelli takes a bit part and puts his own brilliant spin on it. What can I say? He had me at Amadeus. With characters this compelling and so perfectly cast, it’s nearly impossible not to get caught up in the events that unfold.

This Special Collector’s Edition offers up commentary by Jerry Zucker and Bruce Rubin, as well as a number of nifty featurettes. Real life mediums (including famous ghost whisperer James Van Praagh) give props to the film’s accurate portrayal of their work in “Inside the Paranormal”, and we get plenty of behind-the-scenes info in “Ghost Stories: The Making of a Classic” and “Alchemy of a Love Scene”. These featurettes include interviews with Jerry Zucker, Bruce Rubin, Patrick Swayze, Demi Moore, and Whoopi Goldberg. Brace yourself for the shocking revelation that Patrick and Demi didn’t have much off-screen chemistry. Patrick explains that even if actors only feel disgust for one another, all that really matters is that it comes across as passion on the screen. Gasp! Disgust?! Don’t tell me this is another Richard Gere/Debra Winger story!

Other features include a random segment called “Cinema’s Great Romances”, which immediately inspired me to check out A Place in the Sun (Montgomery Clift lets a pregnant Shelley Winters drown because Liz Taylor is cuter! And then he gets the chair!!). The original theatrical trailer for Ghost and a photo gallery round out the extras.