Here’s what you need to know about the Ghostbusters remake: Leslie Jones doesn’t just run away with the entire film, she does wind sprints around her co-stars when it comes to comedy.
By Vickieon December 9, 2016
0 Comments
Our Rating 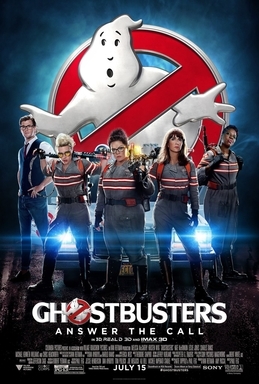 Jones aside, director Paul Feig’s simultaneously praised and poo-poo-ed remake of the 1980s classic is a decent, if not overwhelmingly awesome, retelling of a story that’s grown so close to the hearts of many a moviegoer.

Kristen Wiig and Melissa McCarthy co-star as, respectively, Erin and Abby, scientists and former friends whose relationship soured years ago after they collaborated on a much-maligned book about the paranormal. But when New York City slowly grows infested with an army of spectral pests, the duo put their differences aside in the name of gathering evidence that their long-mocked theories actually hold water. Joining them in their pursuit of the truth are Abby’s colleague, loopy genius Holtzmann (Kate McKinnon), and transit-worker Patty (Jones), whose encounters with otherworldly beings have her determined to suit up and mete out justice.

What follows are the standard-issue plot tropes: assembling the team, testing out the equipment, embarking on an initial mission that doesn’t go as planned… and so forth. Along the way, the Ghostbusters hire Kevin (Chris Hemsworth), a dumb-as-a-bag-of-hammers assistant who can’t figure out how to use the phone, let alone operate a proton pack.

Blessed with a quartet of brilliantly talented comedy aces, the film doesn’t really utilize them as much as it could. Wiig’s average-Jane character is left in the dust, while McKinnon’s headcase seems all over the map and is tough to understand… which is too bad, because both actresses are normally fantastic when they slide into other personas. McCarthy delivers solid work, as usual, and (as cited earlier) Jones stands heads and shoulders above the rest in every way that counts in this film. She owns every scene she’s in. An array of cameos – including original Ghostbusters Bill Murray (as a renowned skeptic) and Dan Aykroyd (as a cab driver) – are cute, but inconsequential. Or, in the case of Ozzy Osbourne (seriously), completely inexplicable. Seriously, did someone lose a bet somewhere?

One of the film’s main shortcomings, though, is its meh “villain” – a nebbish weirdo named Rowan (Neil Casey) – who wants to bring about a massive phantom menace for reasons that are never really clear or particularly compelling. Rather than being a formidable antagonist for the women, the character feels totally secondary to the plot, thrown in simply to propel the narrative. Perhaps if he’d been played by a well-known actor, things might have been different. But Casey is relatively unknown… and not particularly engaging. The result is a “conflict” that’s less about him and more about cool CGI ghosts.

In the end, Ghostbusters is all perfectly fine and fun, and there are more than a few laugh-out-loud moments, but ultimately it doesn’t quite live up to its potential, especially given the caliber of its cast and the epic expectations of millions of film fans. I sort of wish they’d tried just a teeny bit harder.