When I woke up on the second-last day of Hot Docs, I felt like I was hitting the festival wall – sort of like what I imagine a marathon runner feels as he or she reaches the final mile and his or her body konks out. I was pooped, the weather was grey and I seriously considered staying in my pajamas and going back to bed. But then I remembered that this fest only happens once a year, that I love it so much (I’m just as excited now as I was when I started officially covering it for Moviepie way back in 2007!), that I set out wanting to fill my schedule with documentaries, and that I only really had to hang on for two more days (and four more films). 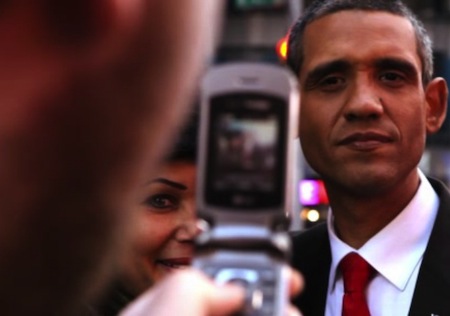 So, off I went to the Lightbox for back-to-back screenings. First up was Bronx Obama (6/8), the story of Barack Obama look-alike Louis Ortiz, who goes from unemployed (self-proclaimed) pessimist to sought-after personality almost immediately after the 2008 presidential election. Tracking dead-ringer Ortiz for several years, through a number of gigs arranged by his kind-of-asshatty manager, the film – directed by Ryan Murdock – is a solid, surprisingly sweet profile of a Puerto Rican guy living the American Dream and trying to retain his integrity. For me, the best parts of the film were those involving Ortiz’s relationship with his daughter, and the ridiculously strong and loving (and goofy) bond they share, even though they live many states apart. His job as father is very clearly the one he values most, which was refreshing to see in a doc about instant fame and celebrity.

By now, most filmmakers have left the festival, so there was no Q&A. But I had seen Ortiz earlier in the week at Hart House, as I waited to see Mad as Hell. He was on his way out of an earlier screening of his film, and the number of double-takes he got as he left the theatre was hilarious. He really does look exactly like the U.S. President in person. 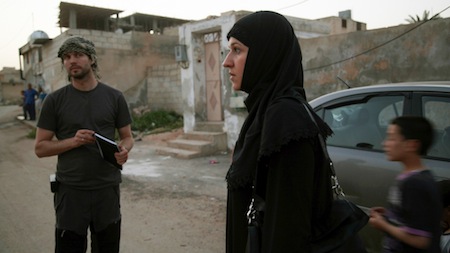 My second film of the day was the (rightfully) highly praised E-Team (7/8), a fascinating glimpse into the work and lives of the Human Rights Watch’s emergency team of investigators, who travel to some of the most dangerous places on the planet, and into some of its most-heated conflicts – to probe accounts of crimes against humanity. Think: Syria, Libya, Kosovo, mass killings, torture and civilians in peril. Often risking their own safety, these men and women – including the four whom directors Ross Kauffman and Katy Chevigny follow for more than two years – try to juggle the pedestrian (and comforting) everyday duties of home life with the dodging-bullets-and-examining-torched-bodies horrors of their work.

Gripping, eye-opening and completely engaging, E-Team reminded me of films I’ve seen and loved at Hot Docs past, such as The Waiting Room in 2012, and Gideon’s Army and Remote Area Medical last year. It’s an immersive experience, free of narration or commentary. You’re simply dropped into the middle of the action and allowed to observe these immensely courageous and committed crusaders dig in and get to work. Excellent, all-around.