Leave it to consistently entertaining, perpetual second fiddle Lake Bell to reveal herself as a triple threat and finally step into the spotlight with this charming little comedy that scored at Sundance and will likely become an end-of-summer sleeper hit. 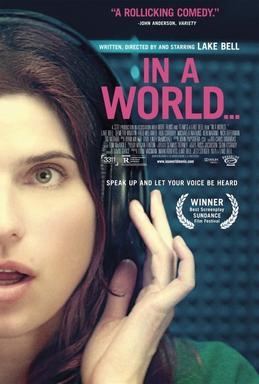 Set in a world of voiceover artists jockeying for the next big gig, Bell’s film follows her character, Carol, who’s making ends meet (barely) as a vocal coach but who, as the daughter of an industry legend (Fred Melamed), longs to be taken as seriously as her male peers. When a major studio announces a search for someone to be the voice for the trailer for its upcoming blockbuster, a battle for behind-the-mic supremacy gets underway. Carol wants the job, but so does her dad and the smarmy young upstart (Ken Marino) who considers himself a shoo-in for the position.

What unfolds is a fun, quirky and refreshing story that finds Carol tangled in assorted webs, including but not limited to: a budding romance with her sweetly nerdy producer (Demetri Martin); the marital woes between her sister (Michaela Watkins) and brother-in-law (Rob Corddry); and her love/hate relationship with the two men standing between her and the coveted studio job.

For Bell – who’s spent much of her career playing the wry best friend (see: TV’s Miss Match or the film What Happens in Vegas) or the lead in little-seen projects (TV’s sci-fi series Surface or the big-screen flop Over Her Dead Body) – this film, which she also wrote and directed, is a chance for all her talents to shine. Immensely likeable and blessed with killer comic timing, she does for Carol what she’s done for every character she’s ever played: namely, turns her into a clever and goofy everygirl next door for whom you can’t help but root.

Here, she surrounds herself with lesser-known but not less-gifted supporting players who also happen to be her pals. (Watch for a cameo by a very-well-known A-lister, and friend of Bell’s, ¾ of the way through the film.) The result is a relaxed, natural tone to the proceedings, and a genuine sense of camaraderie amongst the players. Narratively, the film has a few minor bumps – Marino’s arrogant Gustav is a little over-the-top and not believable as someone in whom Carol would ever be interested – but follows a simple path to a satisfying, smile-inducing conclusion.

In a World is one of those little films that scores because of the sum of its parts. And Bell has wisely assembled a pretty great collection of moving parts that results in a winning whole. When you get tired of the big-budget summer blockbusters, check this one out.