The story seems to skip the first act, rush through the middle, and goes straight for the feels. In the meantime, it barely feels like these two women really know each other, much less that they’ve been besties since childhood.
By Lindaon July 12, 2016
0 Comments
Our Rating 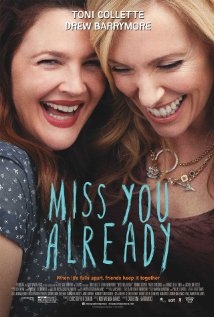 Toni Collette and Drew Barrymore are two of the most appealing actresses in Hollywood, but I admit when I first heard about them being cast as best friends in a movie, I had a hard time picturing it. And now that I’ve seen them as said best friends in the weepie Miss You Already, I’m still kind of scratching my head.

Milly (Collette) and Jess (Barrymore) meet as kids when Jess’ family moves to London from the U.S. In a very quick montage of flashbacks, it is explained how they clicked immediately as kids, and as they grew older, they shared everything, as girl-BFFs do in the movies: Clothes! Boys! Secrets! (according to the official summary, which almost offers more info than the movie). But Milly has always been one step ahead of Jess, as she hooks up with a rocker boy named Kit (Dominic Cooper), gets married, and has a couple kids. Meanwhile, the homebody Jess has finally found a nice man (Paddy Considine) and is (secretly?) struggling with infertility.

But everything changes when Milly is diagnosed with cancer. Or does it? Milly seems the selfish one in her relationships, whether with her friend or her husband, while Jess is always there to give a supporting, accepting smile. I can understand, to a point, Milly’s complete crisis of denial then rebellion, as well as Jess’ urge to support her friend. But there are a lot of things that just don’t make sense. If they are besties, why does Milly not seem to know anything about her friend’s attempts to get pregnant? Why does Kit not know his wife’s favorite watering hole? Why are female friends in the movies always shown to be competitive?

The most resounding moment in film, (that is, beyond the ones that go straight for the weep ducts, whether or not they’ve earned the tears), is a wonderful scene where Milly gets fitted for a wig by a no-nonsense woman named Jill (played by Frances de la Tour). I don’t know what the heck De la Tour managed to do in this scene, other than bring out the absolute best in Collette. De la Tour’s character has fitted many patients with wigs before, and when she strokes Milly’s remaining hair and asks her if it time to just cut it off, you can almost see the release of some of Milly’s fear as she has Jill to hold on to, if only for this part of the journey. That moment showed what Miss You Already could have and should have been, other than Beaches Lite for a new generation.