SIFF 2009: The sun finally comes out, and so the fest begins…

So this is just like Seattle: We’ve had a horrifically crappy spring, full of rain and cold and constant gray skies. Sure there were teasers of a couple weekends in the upper 60s and occasional 70s, then it’s back to 40 degree, dousing wet mornings.

Until SIFF starts, of course. I’m not complaining, mind you, to see a week-long forecast starting with Memorial Day weekend, showing a string of beautiful sunny days averaging about 70 degrees. No, not complaining at all. Except when I emerge from a SIFF matinee and am literally blind for about five minutes. Just a minor, tiny little complaint, really. 🙂 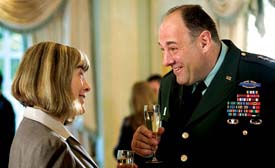 So SIFF launched on Thursday with its Opening Night film In the Loop (6/8) a dry, scathing, and quite funny British/American political farce. The great ensemble cast, including folks like Gina McKee, James Gandolfini, and Tom Hollander, keep up a breakneck pace with verbal bullets flying and whizzing around the room, so nonstop that I know I missed half the jokes. A UK cabinet member (Hollander) unwittingly starts a snowball effect towards a major international conflict when, in a radio interview, he mentions that war with another country is “unforeseeable”. Wait… what? Does that mean “inevitable”? “Unavoidable?” Basically, one bad interview leads to chaos in the world of international relations. The sharp cast is fine all around, but whenever Peter Capaldi shows up as very, very angry Scottish political player Malcolm Tucker, he completely rips the scene to shreds. I don’t think I have ever seen someone so furiously, spittingly foul-mouthed, that is so steadfastly brushed off by all around him. He is hilarious and jaw-dropping, and I would not be surprised to see him on the short list of audience awards at the end of the fest. 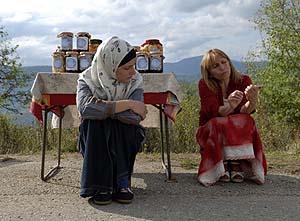 My first “real” SIFF movie landed on Friday night, the drama Snow (Snijeg) (5/8) from Bosnia and Herzegovina. This drama is well meaning, and well acted, but never really shines to make it truly memorable. It is 1997, a few short years after the end of the war that ripped the ex-Yugoslavia apart. In a tiny country village, the only people left are a handful of women and girls, one old man, and a young boy. All of the village’s men have been killed, and the women struggle for survival, without the closure of knowing what happened to their husbands, fathers, brothers, and sons. When a developer comes into town (a Serb, no less) wanting to help an international investor buy their land, they are filled with deep seated prejudice with their fresh memories of the war, but also are fully aware of the bleak future of their independent survival in their isolation. It is an interesting glimpse into a very modern conflict, not only about war (and its aftermath), but about the arrogance of developers that believe with money, they have the right to buy anything that interests them.

At the screening of Snow, I looked around at my first SIFF audience and smiled at the familiarity of it all… There’s the woman reading Bill Bryson’s A Walk in the Woods while waiting in line; people sharing Ziploc bags of homemade trail mix; another woman coming from the drinking fountain, carrying just-filled reusable water bottles for her and her pal; and a man sitting with a clipboard on his lap, holding the New York Times crossword puzzle! These people are the sensible shoes of movie-going, and like Boy Scouts, are always prepared. 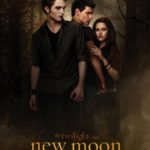