I always approach film versions of favorite books with a combination of excitement and dread. Obviously it’s super cool that someone made a movie of something I already love, but what if they muck it all up and it looks nothing like I imagined in my head? The BFG is especially sensitive territory as it takes the reader into the realm of giants, whizzpoppers, and dreams. It’s a magical, fantastic universe that could be easily be tainted through clumsy interpretation. I’m pleased to report that the team at Disney nailed it.
By Jenniferon December 9, 2016
0 Comments
Our Rating 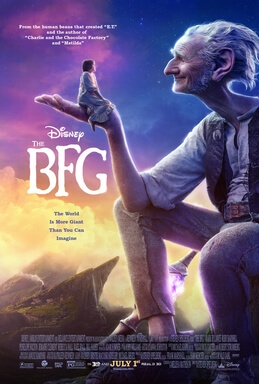 Sophie (Ruby Barnhill) is a clever and curious little girl who lives in an orphanage and suffers from insomnia. She has never had a best friend. She spends her nights wandering the halls or reading in bed, with only the resident cat or passing hooligans for company. Everything changes, however, when she glimpses something unusual out her window; a tall, loping figure holding some sort of trumpet…something that could only be described as a giant. Realizing he’s been spotted, the Big Friendly Giant (or BFG for short), plucks Sophie from her bed and takes her back to Giant Country. If Sophie spills the beans about the BFG’s existence, he’s done for, but how long can Sophie last in Giant Country? The BFG is a gentle vegetarian who subsists on snozzcumbers, but the other giants are vulgar brutes who feast on children.

For awhile the two exist together happily. The BFG (played by Mark Rylance) shows Sophie how he catches, sorts, labels, and delivers dreams, explaining everything in his delightfully endearing yet totally off-kilter version of English. She accompanies him on his magical expeditions, perhaps most memorably to a beautiful, glowing tree surrounded by a magnificent reflecting pond. The film’s seamless blend of animation and live action creates a truly believable fantasy world. I don’t remember any more how exactly I pictured the story when I read it as a child, but as I watched the movie, I kept thinking, “this is right”. The visual effects, the dialogue, and the whole feel of the film perfectly capture the sensibility of Roald Dahl’s book.

The BFG would be adorable if it were solely about the interaction between Sophie and her new friend, but no story is complete without conflict and a bit of action. The behavior of the other giants only continues to worsen as they bully and beat the BFG in Giant Country, then make trips into the human world to steal children…for their dinner. Increasingly appalled and frightened, Sophie and the BFG put their heads together to form a plan that utilizes the best of their resources, and, naturally, The Queen. A happy and hilarious ending is had by all, but it is the fierce friendship between a lonely little girl and an uncommonly sweet giant that will capture the hearts of young and old alike.