What the world needs now is a classic tale of toxic masculinity gone amok.
By Lindaon April 22, 2022
0 Comments
Our Rating 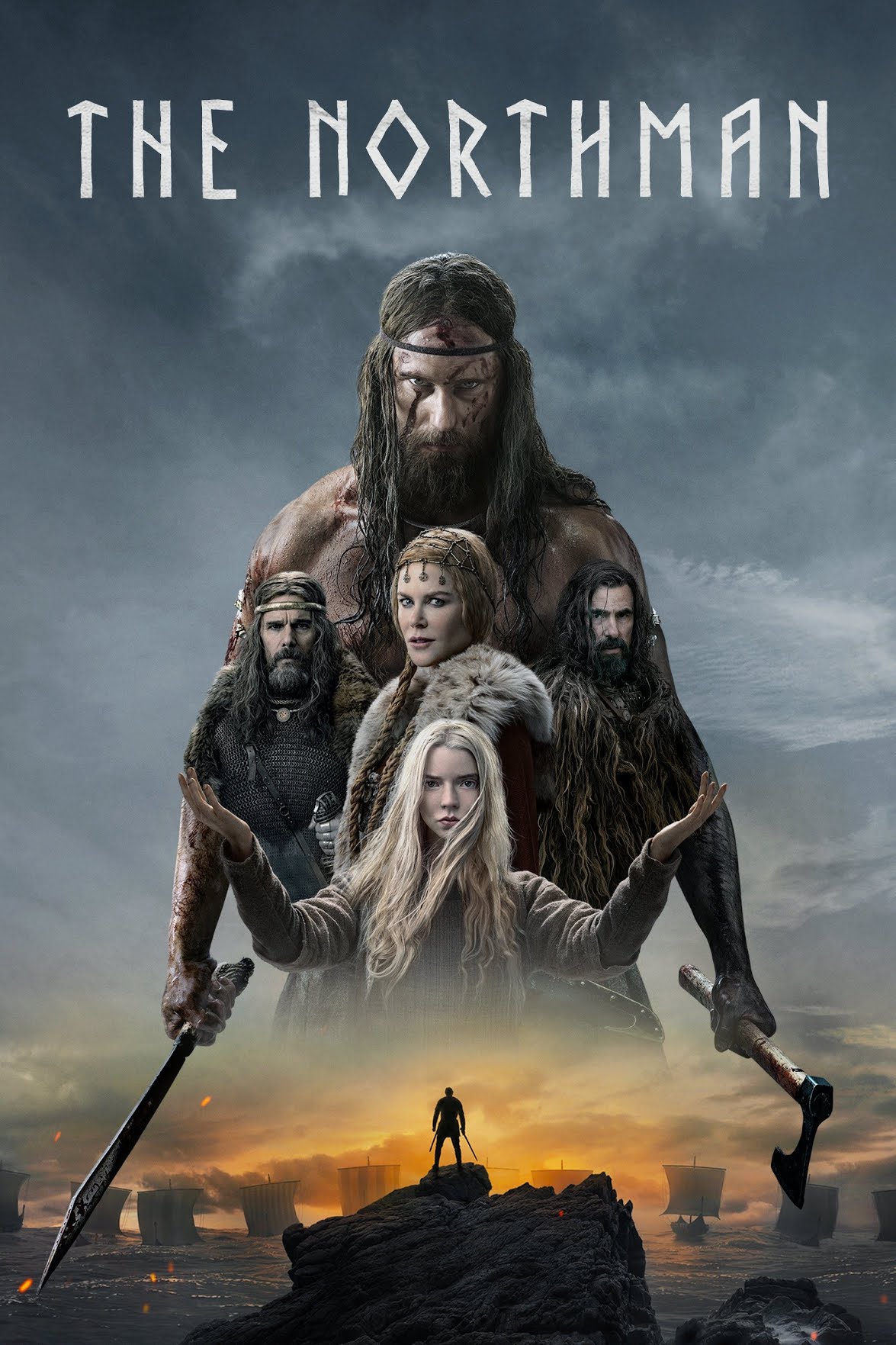 We meet young Amleth, a wincingly starry-eyed Viking princeling with a huge crush on his brutish King father (Ethan Hawke). Dad is like a traveling salesman who happens bring fresh slaves instead of trinkets as gifts for his family when he returns home after a long time away, so when he returns, the kid is basically beside himself with excitement. But while dad has been away, there’s been a power grab in the kingdom. Before you know it, the King has been murdered by his own brother Fjölnir (Claes Bang), who flings the Queen (Nicole Kidman) over his shoulder as a prize and orders his henchman to go kill Prince Amleth. Amleth escapes, and to save face, the henchman tells Fjölnir that the kid is dead.

Fast forward some 20 years, and Amleth (now Alexander Skarsgård) has been muttering one thing to himself over and over and over: “I will avenge you, Father! I will save you, Mother! I will kill you, Fjölnir!” (Makes for a good pacing chant when rowing a ship full of Vikings bent on raping, pillaging, and gathering slaves!) Amleth, a man of apparently only those words (along with a lot of barking, roaring, and howling) is now a beast of a man who bathes in blood and wears the heads of wolves when he goes into battle. He is a killing machine based on unfocused vengeance.

After one particular pillage, he finds out that his uncle Fjölnir apparently lost his stolen Nordic kingdom and fled to Iceland with his remaining people! Finally, a lead! Amleth stows away on a trading ship, and his brought directly to Fjölnir’s land as an undercover slave, where he is finally face to face with his foe, and his own mother… He will finally be able to kill the uncle, rescue mom, and reclaim his right to the throne. But wait… mom seems… happy?

If this all sounds Shakespearean, it absolutely is. The Northman is based on the same Nordic epic saga that inspired Hamlet. When words are spoken, they are always in pronouncements (no time for small talk), and when someone finally gets a meaty speech, luckily it is Kidman who gets to chew the whole scene and spit it out like a gnawed bone, single-handedly changing the whole tone of the film, if only for a moment.

But also reflecting that it is based on an epic, the film goes on and on and on. In these times of 3+ hour superhero movies, 90-minute brisk movies seem a thing of the past. It’s first a little funny when the numbered runic title cards appear with chapter names, but when you’ve passed, say, 7 or 8 title cards, no matter how indirectly amusing they are, people may start looking at their watches. Let’s just say, this 2 hour 17 minute movie ends up feeling way longer.

The Northman does look great, though, and there is an impressive attention to detail. I kind of question that the song of the Vikings sounds like Mongolian heavy metal throat-singing, and that they hung out having uber-manly shirtless drum circles by firelight, but I couldn’t help but notice how beautiful the woven Icelandic cloaks looked, so casually flung over shoulders in the later scenes.

This movie will probably fill a need for audience members that have been missing a big-screen, sword-wielding, vengeance-driven bloodbath after two years of watching stuff on Netflix at home. But for me, the main redeeming thing about this one-note epic was finally seeing Björk on screen again. She shows up for a single scene as the prophecy-murmuring Seeress, giving Amleth some tips and warnings about fulfilling his revenge. In order for her to agree to this brief scene, I like to imagine the filmmakers going, “Hey, Björk, wanna being in our Viking movie?” where she answers, “Only if I can have a grand headdress made of wheat and wear shells for eyes!” They’re all, “Heck yes, come on!” as she excitedly starts pulling things out of her closet. Show me Björk’s outtakes and deleted scenes, and I’ll be happily in the corner watching that… the rest of you can feel free to bathe in blood and howl like beasts for a couple hours.