This schoolgirl ghost has a grudge, and she’s pissed.
By Lindaon October 12, 2013
0 Comments
Our Rating 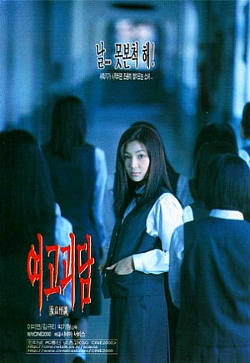 Whispering Corridors begins with a teacher, Mrs. Park, staying after-hours at her girls’ high school to do a little personal research. She pulls old yearbooks off the shelf one by one, flipping through them, looking appropriately horrified at something she’s discovered. A frightening phone call later, she hears a mysterious sound comes from the hallway… no it is not the night watchman, but… EeeeeEEEEE! Actually, we don’t really know what happens to Mrs. Park, except that she is thrown-about, strangled, and eventually tossed off the roof so that she is hanging from a tree, to be discovered by students the next morning. Is it suicide? Murder by a ghost? Those were the questions that the students and staff asked, but it wasn’t the question in my mind: I couldn’t help but wonder if Mrs. Park was played by a man in drag. (Turns out, no.)

A young teacher comes to the school, fresh and pretty, but with dark secrets of her own. She has a sneaking suspicion that the angry ghost is her best high-school girlfriend who committed suicide. Why is the dead girl lashing out now? Why does she kill? Or has the girl perhaps taken the physical form of one of the living students?

This all sounds like an interesting mystery, but Whispering Corridors tries to spread some drama in the middle of the erratic attempts at horror with a handful of rather interchangeable students. There is the pretty, brainy, yet jaded one who befriends the new teacher; there is the arty outcast; there is the shy one who befriends that girl; and then there is the ashen, slack jawed, spooky-eyed one who sits and glares in class. I guess we are supposed to be absorbed in trying to figure out how the ghost is killing, but the truth is, the film is too boring and choppily edited to really make us care.

Whispering Corridors apparently was a huge hit in Korea and was a bit controversial as it supposedly exposed the sorry state of the school system. Girls are physically punched and beaten by the staff (particularly by a sadistic teacher, Mr. Oh), sexually harassed (Mr. Oh, again), and humiliated (by pretty much the rest of the staff). And the ghost herself is a suicide, who still, of course, has a grudge against the school that broke her.

But even if the movie may be a daring comment on the crappy school system (I wouldn’t argue that), it unfortunately isn’t a good movie. I’ve read that Whispering Corridors spawned sequels that are far better than this original. As far as this one, skip it. It’s tedious, bordering on unwatchable.