What follows is basically Meatballs for addicts.
By Jenniferon February 8, 2014
0 Comments
Our Rating 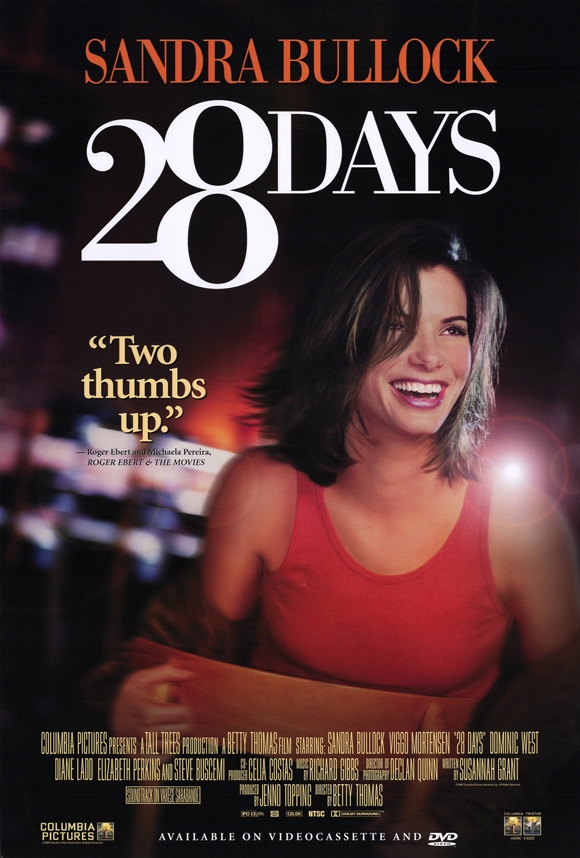 I know I said I would watch Viggo Mortensen muck out stalls in my Hidalgo review, but I never quite factored Sandra Bullock into the deal. It’s like being duped by a tricky genie who grants your wish, but throws in a surprise—”Ha-ha! You forgot to say that Sandra couldn’t be there, smartypants!” Okay, okay, I’ll put up with Sandra, but I don’t have to like it.

28 Days begins with Gwen (Sandra Bullock) ruining her sister’s wedding with her drunken behavior. Before the day goes completely down the toilet, her sister (Elizabeth Perkins) looks her in the eye and says, “You make it impossible to love you.” Oh goody! I wanna watch a movie about that girl, don’t you? Gwen rounds out the day by driving a limo into someone’s porch, and is given the choice of entering a rehabilitation program or going to jail. Can you guess which one she picks?

What follows is basically Meatballs for addicts. We watch as Gwen resists treatment, acts as though she’s better than everyone else, and denies that she has a problem, all in a summer camp environment. Through flashbacks, we learn that Gwen’s mother was also an alcoholic whose motto was, “If you’re not having fun, what’s the frickin’ point?” To make matters worse, Gwen’s boyfriend, Jasper, makes fun of the program and proposes to her over a bottle of contraband champagne. Clearly he is her enabler. It’s so clear, in fact, that he may as well wear a sign. There’s not a lot of subtly in this movie – to the point where a chemically impaired person could totally understand the plot.

The tide turns for Gwen when she falls out of a tree while trying to retrieve some pills. She is rescued by Eddie Boone (Viggo), who carries her back into the center on his way to check in. He is a professional baseball player (obligatory rehab celeb) with addictions to alcohol, drugs, sex, and the soap opera Santa Cruz. Eddie teaches Gwen how to throw a baseball, lets her watch his soap opera with him, and shares tales from his past as they muck out stalls (my favorite involves him throwing up on a turkey at a holiday dinner—too bad we don’t see that in flashback). They have a tiff at this point, because Gwen won’t tell him a story, and later she catches him hiking up his pants in another patient’s room. Damn sex addicts, you can’t leave them alone for a minute!

After falling out of the tree, Gwen begins to participate in her own recovery. By the end of her stay, she has befriended a number of patients, and is ready to attempt a healthier life. Eddie’s not meant to be her Prince Charming, but he does offer this final bit of advice, “That guy Jasper is dangerous for you.” Though it seems obvious to the rest of us, Gwen needs to hear this in order to move on… which she does, just in case that wasn’t abundantly clear.

In essence, 28 Days is about the capacity in all of us to change, overcome adversity, and survive. It’s not a bad message, but it’s one delivered with all the delicacy of a public service announcement.