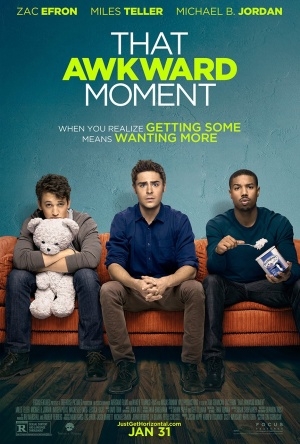 At one point in That Awkward Moment, one of the guys in the film mentions Jerry Maguire. Almost in unison, they all exclaim, “I LOVE Jerry Maguire!” Of course they do! Once that was stated, I couldn’t get it out of my head. That Awkward Moment is like a Jerry Maguire for a new generation: Douchey guy woos nice girl. Nice girl falls for douchey guy. Douchey guy does something REALLY douchey (read: pretty much unforgivable). Douchey guy realizes he’s a douche and actually loves the girl and wants her back, this time for real. Expect we, as the audience, are supposed to root for the douche. In the case of Jerry Maguire and this movie, I wanted to holler at the screen, “GIRL! You can do better!”

Jason (Zac Efron) is said douche. He brings home a rotating list of chicks, and dumps them as soon as the “So.” What’s the So? It’s when the girl says, “So… where is this going?” BAM! Commitment-phobic Jason is out of there.

When Jason’s buddy Mikey (the charming Michael B. Jordon) finds himself booted to the curb by his wife (who is sleeping with her lawyer), Jason, Mikey, and their pal Daniel (Miles Teller) make a pact of bros before hos. Stay single! Party all the time! Have sex with all the girls! But behind all their bravado and posturing, these guys are all a bunch of romantics who gradually, secretly find themselves in (dare we say it) relationships.

That Awkward Moment plays like Sex and the City combined with Friends, but all from the guys’ perspective. The focus of Jason’s obsession, Ellie (Imogen Poots) is kind of like a hipster fantasy girl (She likes booze! She plays Xbox! She has a huge, hookery box of condoms!). More interesting is Daniel’s buddy Chelsea (Mackenzie Davis). She’s adorable, witty, smart, and totally his buddy before he realizes the catch right in front of his eyes. If Daniel didn’t see who was in front of him, I would have reached through the screen and smacked him upside the head.

That Awkward Moment definitely has its moments; a couple even made me cackle (one involving Viagra, and another featuring a “dress up” party). Efron, Jordan, and Teller actually have a really fun chemistry as longtime best friends. Seriously, when they are sitting in a coffee shop talking about chicks, it may as well be Sex and the City: Boy Edition! But when the story starts to take itself seriously, and focuses on Jason’s realization and regret that he completely screwed up the relationship that he didn’t think he was in, well you may as well hit snooze and put the movie on rom-com auto-pilot.