Despite some monster box office hits, like various sequels for Transformers, Twilight, and Harry Potter, the box office was down in 2011. People may have simply been staying home with their new phancy home theater systems, but it was also argued that there weren’t a lot of really good movies worth seeing. As I looked through the list of films that I saw this last year, I was sad to see that there really wasn’t a full-pie movie that I loved loved loved this year. However, there were quiet a few GOOD movies that were worth seeing. So, my top movies of the year, in no particular order…

50/50 – I think audiences shied away from this hard-sell “cancer movie”. But the skittish are missing out on what is essentially a funny and touching buddy-movie between sick Joseph Gordon-Levitt and his protective best friend Seth Rogen. Throw in nice supporting performances by Anna Kendrick and Anjelica Huston, and you’ve got a movie that stayed with me long after I saw it.

Rango – A couple minutes into this hilariously strange animated tale of a lizard stumbling into an Old West desert town infested by vermin, I turned to my friend and said, “This movie is really weird. I love it!”

Beginners – This quiet drama is mostly about Ewan McGregor’s Oliver, an emotionally drowning man trying to keep afloat in a new relationship with an equally sad woman. But the story is saved from heaviness by the light and funny performance of Christopher Plummer, who plays Oliver’s gay father, who comes out at age 75 after the death of his wife.

Hugo – A gorgeous, golden-toned ode to everything from train stations to clocks to 1930s Paris to silent movies, Martin Scorsese’s lovely and melancholy story of an orphan boy missing his father completely immersed me in its nostalgic world.

The Muppets – I laughed and cried (and I know I wasn’t the only one) during the sweetest, sunniest movie of the year, a charmer that left me with a big muppety smile on my face for days after.

Mission Impossible: Ghost Protocol – Oh, Tom Cruise, you often make me cringe—but you did star in the most thrilling action movie of the year. See the film in IMAX if you can, and try not to gasp as Tom climbs up the side of the Burj Khalifa skyscraper in Dubai.

Win Win – The people in Tom McCarthy’s films always feel like a comfortable pair of old, worn shoes. Paul Giamatti plays a struggling lawyer-slash-high school wrestling coach that takes a troubled teen into his home. Gently funny, it is also sweet and moving, like all of McCarthy’s films.

Rise of the Planet of the Apes – A B-movie that totally took itself seriously, this reboot (again) of the series was stolen by the apes. Yep, except for John Lithgow’s supporting performance, the humans ranged from cardboard to cartoonish. But then there was the chimp Caesar (a CGI creation played by Andy Serkis). When Caesar speaks for the first time, I audibly gasped… then went, “Yay!” and threw my popcorn in the air.

Downton Abbey – OK, so this may seem like cheating… after all, Downton Abbey is a made-for-TV series, but it was the most deliciously well-acted, soapy upstairs/downstairs period drama that I’ve seen in a long time. I dare you to not watch all six episodes in one sitting! Lucky for us, there is another season coming!

The Tree of Life – I admit the almost half-hour introductory montage portraying the creation of the universe was kind of head scratching, but once the meat of the film gets going—a 1950s drama of a boy at odds with his father (played by Brad Pitt)—you have a stellar drama. But watch out for the dinosaurs (seriously!).

The Tree of Life

1) Gwyneth Paltrow getting her face peeled off for a brain autopsy in Contagion, and
2) Dominic Cooper, as Uday Hussein, disemboweling a disagreeable party-goer in The Devil’s Double. (As I lean over to barf in the aisle…)

Most offensive moment in a movie I hated:

There is a scene in Transformers: Dark of the Moon where a Space Shuttle explodes shortly after takeoff. Really?!??! REALLY?!??! You could actually feel the audience turn to ice in the theater. How many suits approved this scene before it made it to the screen?

Bridesmaids (OK, a food poisoning vomit-fest is still funny when played by women!)

Best impression of an alien from Alien:

When we first meet Keira Knightley in A Dangerous Method, she is a crazy lady on the first carriage to Crazy Town. She shows this by alarmingly unhinging her jaw and thrusting it forward in contorted fits. Alas, this is the best screenshot I could find… but I guarantee, once the movie hits home video, you will see fan pages dedicated to her Alien jaw.

Childbirth scene that achieved a new level of awesome:

Everyone who has read the books (come on, admit you’ve read the whole series), couldn’t wait to see if the birth of the tooth-baby in The Twilight Saga: Breaking Dawn – Part 1 delivered (drumroll… crash!). Oh, you’ll bet it did! If anything it could have been more graphic, but you have to love the slow-roll horror of a scene that culminates with (spoiler!) Edward biting through the womb with his vampire teeth to save the baby!

Greta Gerwig was dorkily adorable in the underrated No Strings Attached, which made me seek her out in 2010’s Greenberg. Shoot, I may even try to watch the Arthur remake because of her!

While watching A Dangerous Method, I found myself zoning out on all the talky-talk, and instead cooing (inwardly), “That Michael Fassbender is SO handsome!” He had a great year, also appearing in X-Men: First Class and Shame.

My favorite character, whose name when pronounced, sounds just like mine:

People at the Tinker Tailor Soldier Spy screening I attended were probably wondering why my cluster of friends were bursting into giggles every time Peter Guillam (played by Benedict Cumberbatch) was addressed by name. But seriously, Mr. Guillam? You are my good-guy hero of the year, and not just because we are related!

Though LGBT movies are often ghettoized (for good reason), Weekend, a story about two men that emotionally connect for a weekend after a one-night stand, almost made my top ten for the year. (I just wish the characters, both appealing, didn’t have to do lines of coke all night in order to have a conversation.) 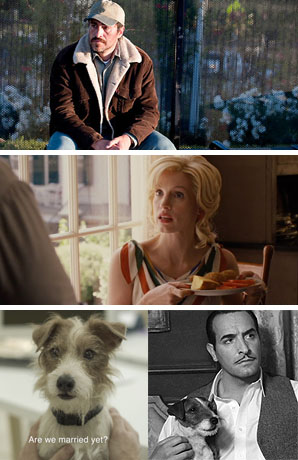 Demián Bichir, who I had only seen as the slick, charming drug-lord mayor in Weeds was unrecognizable in A Better Life. He plays a Mexican gardener in Los Angeles, who is trying to protect his son from gangs while living under the radar to avoid deportation. I kept thinking throughout the film, “Oh, he is SO good in this…” Then he goes and blindsides me right at the end with a heartbreaking scene that had me sobbing through the closing credits.

Jessica Chastain, who was 2011’s It Girl, stood out for me in the stellar cast of women in The Help. Her white-trashy Celia Foote may not be the brightest bulb, but she is the kindest and most pure of heart in a society of classist and racist Southern white women that don’t accept her.

There were two scene-stealing doggie co-stars the performed beyond the call of duty: Cosmo, in the movie Beginners, is the earnest conscience for Ewan McGregor’s grieving lost soul. The Artist‘s Uggie, as a Good Dog is wont to do, is the only truly loyal friend of the silent movie star played by Jean Dujardin when he hits rock bottom. Give those pups some treats!

We first saw Chris Evans’ man-breasts in the movie trailer for Captain America: The First Avenger, and they are no less astonishing in the film itself. You could hear the murmurs of women in the audience, “Holy smokes! His breasts are bigger than mine!”

Stinkiest movie-related thing to happen in 2011…

I got bumped from the press list for the Seattle International Film Festival after 10 years. (Shaking fist!)

…Which was immediately forgotten when the most awesome movie-related thing, like, EVER happened to me:

The Hunger Games. As a fan of the books, I have to say the trailer is awesome! We just hope that the movie lives up to this teaser!