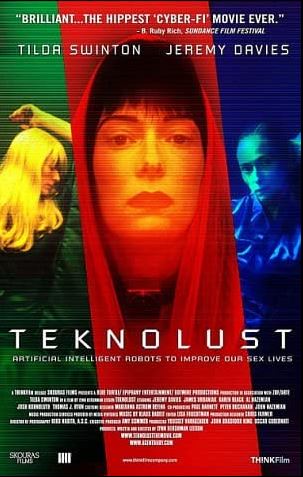 Where is our society headed technologically? How will that technology affect our lives? Is artificial life possible? What role will it play in our ongoing evolution? Is advancing technology truly bringing us closer together, or making it disturbingly easy for us to isolate ourselves?

We are ripe for a film that explores these issues, but Teknolust is not that film. It is, however, funny, well-acted, and moderately provocative.

Tilda Swinton (The Deep End), one of the most talented and versatile actresses working today, plays Rosetta and her three Self-Replicating Automatons (SRAs): Ruby, Olive, and Marinne. Each has her own distinct personality and set of emotions, and think of Rosetta as both their mother and their sister. They live in a color-coded, digitized environment, though we never actually find out where this is—Rosetta only seems to communicate with them through computer screens (and a uniquely configured microwave in her kitchen). Each night, Ruby goes to bars and collects semen from unwitting men to replenish her and her sisters’ X-chromosome count, without which they die. However, problems arise when Ruby’s sexual partners start to develop barcodes on their foreheads, prompting Rosetta’s colleagues to investigate this strange “virus.” Soon, Ruby is a wanted woman, and Rosetta is doing everything she can to keep anyone from discovering her “children.”

I had a lot of trouble writing this review, because though I liked the film immensely, it’s easier to articulate its flaws than its virtues. Like the fact that it doesn’t fully explore the ideas it brings to the table, or their implications. Halfway through the similarly surreal Orlando, Swinton changes gender without a single mention as to the “hows” or “whys” of the matter, because that wasn’t the point of the film. However, it seems that in this, a movie so oriented with technology, artificial life, and what makes us human, the “hows” and “whys” really should be at least part of the point. Are the SRAs physically part machine? How exactly were they “born”? What triggered this viral infection that Ruby spreads? Why does it stop when it does? Teknolust could have evaded this responsibility by having a plot, or providing us with the aforementioned “provocative insights,” but it doesn’t, really. Teknolust refuses to follow some of the most popular movie conventions that you would expect to find in a story like this, which is jarring.

Yet, I couldn’t help but like Teknolust—a lot. For one thing, it seems to take an unexpected route by focusing on the comedic possibilities of the situation. The film is not a “comedy,” yet this is the area in which it most succeeds. It is in this respect that director Lynn Hershman-Leeson fully explores her material (before the screening, she even came to the front of the auditorium and told us not to be afraid to laugh during the film. I was afraid she was warning us that it was bad, but thank goodness I was wrong).

Technically, the film is quite an achievement. The often- digital effects and interfaces blend in seamlessly, probably because the raw footage was in digital as well, resulting in an absolutely beautiful film. Shot in high-definition digital video (one of the very first of its kind, even shot before Attack of the Clones, the director said afterward), it made me glad that I was seeing it at the Cinerama, with its state-of-the-art digital projection system.

In any case, Teknolust is a unique piece of filmmaking with all sorts of things going for it: An intriguing and relevant premise, four stellar (and totally different) performances from Swinton, a visionary production design, and more. It is deliciously surreal, never boring, and a hundred times more brave, if not ambitious, than anything else you’re likely to find in the multiplexes.