2016 will go down as a rollercoaster, shit-show of a year, whether in regards to the never-ending horrific headlines of violence both at home and abroad, to the astonishing year in politics, to the punch-in-the-gut unexpected deaths of beloved celebrities. 2016 was simply a bully. But that is why we go to the movies, right? To escape, yet see ourselves reflected on screen. To learn about others who are different than us, but hopefully emerge out of the dark theater with a better or new understanding of the world.

Here are my favorite movies of 2016. Is it a coincidence that many are tinged with sadness and heartbreak? Probably not…

Moonlight – A shy bullied boy becomes a self-protective teen becomes a hardened young man. The glimpses of kindness in Chiron’s life break your heart, whether it be from the neighborhood drug dealer to the classmate who shows him tenderness to the old friend that searches for the kid he knew in the adult-Chiron’s eyes. As beautiful as it is sad, Moonlight also has the most surprisingly lovely final scenes of any movie this year.

Hell or High Water – On the surface, this tale of two down and out Texas brothers (Chris Pine and Ben Foster) robbing small town banks seems like one we’ve seen before. But when the movie slowly reveals why they target specific banks and why they seem to only take “just enough” each time, it becomes a profoundly sad, deeply infuriating, and utterly American story.

Bright Lights: Starring Carrie Fisher and Debbie Reynolds – I saw this documentary in early December and thought it was a quirky, Grey Gardens-esque tale of a super-famous mother and daughter’s complicated but loving relationship, and a surprising and honest depiction of aging. Three weeks after I saw the film, Fisher and Reynolds died a day apart right after Christmas. Since then, Bright Lights has suddenly become a completely different film: a smile-and-sob-worthy time capsule of a great Hollywood love story.

The last third of Certain Women – Kelly Reichardt’s triptych of stories about women in Montana has a sublime third act that plays like a perfect short story. The quiet, everyday routine of a lonely ranch hand (Lily Gladstone) is shaken up by the arrival of a teacher (Kristen Stewart) whose awkward friendship seems to open up for the rancher a (small) world of possibility. Simply lovely.

Life, Animated – OK, finally something to make you smile and, yes, get all weepy-happy. This sweet, kind of amazing documentary tells the story of how a young autistic man named Owen Suskind had a communication breakthrough by “speaking Disney”, connecting his inner life to the world via Disney cartoons. Shoot, you don’t have to sell me on the magic of movies… (as I wipe away the tears)

Complete Unknown – Say you have a birthday party, and a friend brings a date… But it turns out she is a blast from your past who not only gives you no glint of recognition, but presents herself with a completely different name and story. But you KNOW you know her. Both Michael Shannon and Rachel Weisz both had a great year, but this strange, unsettling, and thought-provoking movie was my favorite for both of them.

Author: The JT Leroy Story – JT Leroy was a literary “it boy” of the 90s–a street-kid hustler turned writer that wowed critics, rock stars and other famous hangers-on. He was authentic and raw, mysterious and a reclusive. Except he was completely made up. This “so weird that it is true story” unravels one of the strangest modern tales of celebrity, media manipulation, and false identity.

Arrival – The real world doesn’t have a universal translator for the alien life forms that have shown up on our planet. That’s why you need to bring in a linguist like the soulful, introspective Amy Adams in one of her best roles yet.

Silence – On the surface, Scorsese’s epic is about the persecution of Catholic priests in Japan in the 1600s after their failed attempts to turn the country Christian. But take a tiny step back, and substitute either side with different modern religions or political views, then ask yourself: What would it take for you to renounce your most deeply-held truth?

Whiskey Tango Foxtrot / War Dogs – Tina Fey plays a journalist in war-torn Kabul, Afghanistan in the first film, and Miles Teller and Jonah Hill drive across Iraq as opportunist, in-over-their-heads arms dealers in the latter. Both films are true stories of America’s relationship to modern war, and are so outrageous that you laugh while you cringe. In our short-attention-span, media-soaked world, it sometimes feels all fun and games until someone loses an eye… or their lives.

Tom Bennett in Love & Friendship – As Sir James Martin, every time foppish Bennett opened his mouth with his guileless, empty-headed stream-of-consciousness thoughts, he gave me a fit of the giggles.

Lily Gladstone in Certain Women – A woman of few words with a quiet life working on a ranch, her life is changed when she meets an equally lonely teacher. The rancher holds her emotions close to her chest, and her face changes subtly from anticipation, to joy, to hope, to disappointment, as quietly as her surroundings.

Sunny Pawar in Lion – You know how you want to take kittens and puppies and stuff them in your mouth because they are so stinkin’ cute? I had the same reaction to self-assured Pawar as little Saroo, a child lost on the streets of Calcutta. I just wanted to EAT. HIM. UP!

Montana – The Big Sky state’s landscape and mood were as present as any character in Certain Women and Arrival. No, those clouds rolling off the hills into the valley in Arrival were not CGI, they were real, leaving the filmmakers as agog as the audience.

Best first half of a movie:

In The Light Between Oceans, Michael Fassbender and Alicia Vikander meet and fall in love, living alone in a remote lighthouse on a windswept island hours from civilization. Horrible weather and brutal tragedy try to break them… Then, worst of all, suddenly this glorious, moody film turns into a Nicholas Sparks pile of poo.

Best use of a song

Barbara Lewis’ “Hello Stranger” in Moonlight. Why did one man call a friend from his past after so many years? This song, that’s why.

Take A24‘s weird, challenging movies like The Lobster, Green Room, Swiss Army Man, and The Witch, and add a dose of critically-acclaimed indie dramas like Moonlight and 20th Century Women, and you suddenly the most interesting and daring out-of-nowhere independent film company releasing films today.

Though the movies are based on real-life exciting events, both Sully and Deepwater Horizon trumpeted female stars Laura Linney and Kate Hudson (respectively) in their casts. What did these actresses get to do? Act with a phone. They both spent the vast majorityof their screen time (if not all, in Linney’s case) holding a phone and making frantic calls to their heroic, busy-saving-lives husbands. Putting a token woman in the cast just to say you did is pointless and embarrassingly obvious if they are not given anything to do.

Seriously, when I first saw the trailer for Hidden Figures, my jaw dropped. Look at this cast! What is this fantastic story?? Oh my god, it’s a TRUE story about African-American women’s roles in one of the most famous era’s of modern history, the Space Race! How have we never heard of this??? The trailer hit at a time before the election, when there was confidence, strength, and excitement among many women in the country. The trailer itself felt like a fist-pump in the air. Now that it is after the election, women, girls, and, well, everyone… need movies and stories like this more then ever. Come on screenwriters, keep them coming! 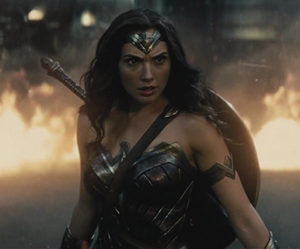 OK, I almost didn’t choose this actress because the winner is often someone that is kind of asking for a wee bit of objectification because of their magnificent female (or male) breastage. But you have to give it to Gal Gadot for her brief and all-out MOVIE-STEALING introduction of her character Wonder Woman in the otherwise stinky superhero movie Batman v Superman: Dawn of Justice. Though her screen time is a mere 7 minutes total in the otherwise bloated and dull 151 minute smackdown, Gadot is a fierce, badass, SMOKIN’ HOT warrior princess. At the end of her battle scene, the theater burst into wild applause, then proceeded to snooze through the rest of the film as soon as she was gone. I can’t wait for her own movie in the summer of 2017. It’s. About. Freakin’. TIME.

Seriously, Andrew Garfield‘s hair reaches its own sort of distracting glory in Martin Scorsese’s religious epic Silence. As a persecuted Portuguese priest in 17th century Japan, his hair starts out long and combed back, but as he gets more and more disheveled and downtrodden (and apparently runs out of hair bands), it gets bigger, fuller, and more majestic, causing jealousy and awe in the follicly challenged members of the audience and probably his co-stars, too.

The Oscar montage is going to be brutal. The year was a bully, kicking us all when we were down, then kicking us again and again, each time with a “too soon” surprise… finally tossing us off a cliff at the end of the year when we thought it was done, and there couldn’t possibly be any more In Memoriam tributes to be written. Among the fallen were David Bowie (The Man Who Fell to Earth, Merry Christmas Mr. Lawrence), Alan Rickman (Die Hard, Galaxy Quest, Harry Potter), Prince (Purple Rain), and heck folks like Abe Vigoda and Florence Henderson, whose passings would have been a bigger deal if there weren’t… so… MANY. (And I’m not even counting losses in my non-cinematic real life.) But, as they say, death comes in threes. Barely giving us a chance to mourn pop singer George Michael, who unexpectedly died on Christmas Day, death shocked us one final time by taking Carrie Fisher and her equally iconic mother Debbie Reynolds a day apart. It was too, too much. So on New Year’s Eve, most of us were toasting 2016 being DONE, rather than celebrating the New Year. 2016, I’m all cried out over you. Take a deep breath everyone… let’s hope 2017 is better in every way.